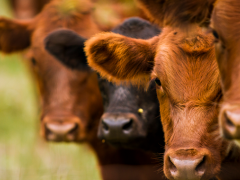 What is Gene Editing?

What is gene editing?

Gene editing has many potential applications. For example, it can be used to correct diseases and disorders that have a genetic basis. It could also be used to change a less desirable form of a gene (called an allele) to a more desirable allele without the need to introgress (repeatedly backcross) or bring in that allele through outcrossing with an animal that carries the desirable allele. Therefore gene editing is really more like precision breeding where breeders can introduce the specific sequences that they would like to select for using gene editing technologies.

Gene editing is different from traditional genetic engineering. Continuing with the analogy of a word processor, genetic engineering enables a gene sequence of “foreign DNA” to be “cut and pasted” from one species to another; typically the location where the new DNA sequence inserts into the genome is random. Gene editing can add, delete, or replace a series of letters in the genetic code at a very precise location in the genome.

The basic idea behind gene editing is that molecular scissors called nucleases are used to cut DNA at a specific location in the genome based on recognition of the specific, unique target DNA sequence. The cut site is then repaired using the DNA repair mechanisms of the cell. These repairs can be directed to introduce, delete, or replace a series of letters in the genetic code. This essentially enables the introduction of known, desired alleles based on what is understood about naturally-occurring genetic variation in the target species.

Without the addition of template DNA, the double stranded breaks created at a precise location in the genome by the nucleases are repaired by the cell’s natural DNA repair mechanism, and this typically results in single nucleotide changes, deletions or small (1-2 nucleotide) insertions at the DNA cut site. In this case, although the location of the cut site is very precise, the exact change that occurs when the DNA is repaired is random and so a number of different outcomes representing minor sequence changes are possible.

Supplied with a nucleic acid template, however, the double stranded breaks initiated by the nucleases are repaired via the cell’s “homologous recombination” repair pathway whereby the template dictates the sequence resulting from the repair, allowing the introduction of the DNA sequence dictated by the template into the host genome. Such changes might range from nucleotide-specific changes, to large (whole gene) insertions or substitutions depending upon the template. The end result of this maybe a targeted SNP edit (e.g. the nucleotide A at a given location in the genome is deliberately replaced by T), the replacement of one naturally occurring allele with another naturally occurring allele at target genetic gene locus in that species, or the introduction of a novel DNA sequence as encoded by the template at the target location in the genome.

There are many potential uses of this technology ranging from human medicine to plant and animal breeding.

How might gene editing be used in animal breeding?

Gene editing has been used to produce genetically hornless Holstein dairy cattle by replacing the Holstein “horned” allele with the naturally-occurring Angus “polled” allele at the gene that is responsible for horn development  and to generate pigs with a single base deletion in a gene that may confer resilience to African Swine Fever Virus. Recently a paper was published showing that gene edited pigs were protected from porcine respiratory and reproductive syndrome (PRRS) virus, a particularly devastating disease of the global pork industry. It has also been used to introduce changes in the myostatin gene in sheep and cattle.  As the Latin origin of the word myostatin (muscle/stop) suggests, turning off this gene results in muscle growth. Naturally-occurring mutations in this gene have historically been selected by conventional animal breeders and are the genetic basis for the “double muscled” phenotype that is seen in cattle breeds like the Belgian Blue, and the “bully” phenotype in whippet dogs.

In this way, gene editing really mimics the natural processes that form the basis of selective breeding programs, and for that matter, natural selection.  Breeders work with the genetic variation that exists within a species, and that genetic variation ultimately arises from naturally-occurring mutations. Although the word “mutation” sounds negative, it simply refers to variations in DNA sequences. These variations, or mutations, are responsible for virtually all genetic differences which exist between individuals, such as having blue eyes instead of brown.

Although different mammals have many of the same genes, many people do not appreciate that the genetic code that makes up those genes differs among animals of different breeds, and even among animals within the same breed. In fact, with the exception of identical twins, there are literally millions of DNA sequence variations between two individuals of any species. For example, an enormous number of genetic variants have accumulated within cattle since the advent of domestication and selective breeding due to the naturally-occurring processes that lead to a small number of mutations each generation. In one recent analysis of whole-genome sequence data from 234 taurine cattle representing 3 breeds, more than 28 million variants were observed, including insertions, deletions and single nucleotide variants. A small fraction of these mutations are those that have been selected by breeders; most of them are silent and have no impact on traits of importance to breeding programs.  Occasionally, such mutations result in a genetic condition such as red or black coat color or an undesirable disease condition such as dwarfism.

Data coming out of some of the large-scale genomic and sequencing projects are revealing situations in which the sequence of one naturally-occurring allele results in superior performance than observed when animals inherit an alternative allele of that gene. It is envisioned that it might be possible to edit an animal’s genome to the superior allele, and to do that at several genomic locations, or for several different genes. The advantage of gene editing over conventional selection to move these naturally-occurring alleles from one animal to another is that favorable alleles rarely all occur in one single individual and editing offers the opportunity to increase the frequency of desirable alleles in an individual or a breed more rapidly than could occur through conventional breeding.

One could potentially envision editing several alleles for different traits – such as disease resistance, polled and to correct a known genetic defect – all while using conventional selection methods to keep making genetic progress towards a selection objective. One study found that combining gene editing with genomic selection could improve the response to selection four fold after 20 generations.

It should be remembered that complex traits are typically impacted by many different genes. It is not likely that all of the genes impacting such traits are known, nor is it typically evident which might be the desirable molecular edits for these genes (i.e. what is the sequence of the desirable allele). It is likely that editing will be focused on large effect loci and known targets to correct genetic defects or decrease disease susceptibility, and conventional selection will continue to make progress in selecting for all of the many small effect loci that impact the complex traits that contribute to the breeding objective.

Gene editing offers an approach to translate the thousands of SNP markers discovered through livestock sequencing projects, the information obtained from numerous genome wide association studies, and the discovery of causative SNPs (Quantitative Trait Nucleotides; QTNs) into useful genetic variation for use in animal breeding programs.

Will gene editing be regulated?

At the current time it is unclear whether gene editing will be formally regulated as is the case with animals that have been produced using genetic engineering. Animal breeding per se is not regulated by the federal government, although it is illegal to sell an unsafe food product regardless of the breeding method that was used to produce it. Gene editing does not necessarily introduce any foreign genetic DNA or “transgenic sequences” into the genome, and many of the changes produced would not be distinguishable from naturally-occurring alleles and variation. As such, many applications will not fit the classical definition of genetic engineering. For example, many edits are likely to edit alleles of a given gene using a template nucleic acid dictated by the sequence of a naturally-occurring allele from the same species (e.g. the hornless Holstein example described earlier used template sequence based on the polled allele from Angus). As such there will be no novel DNA sequence present in the genome of the edited animal, and likewise no novel phenotype associated with that sequence. It is not evident what unique risks might be associated with an animal that is carrying such an allele given the exact same sequence and resulting phenotype would be observed in the breed from which the allele sequence was derived.

It is possible that nucleases might introduce double stranded breaks at locations other than the target locus, and thereby induce alterations elsewhere in the genome. Such off-target events are analogous to spontaneous mutations and can be minimized by careful design of the gene editing reagents.

Governments and regulators globally are currently deliberating about how or if gene-edited animals should be regulated. It is likely that gene editing will be considered on a case-by-case basis depending upon the novelty of the edited DNA sequence and the resulting attributes or phenotype displayed by the animal. Although gene editing is a very versatile tool, many applications will likely result in animals carrying desirable alleles with sequences that originated in other breeds or individuals from within that species. As such, this process is directly analogous with conventional breeding. There is a need to ensure that the extent of regulatory oversight is proportional to the unique risks, if any, associated with the novel phenotypes. This question is of course important from the point of view of technology development, innovation and international trade.