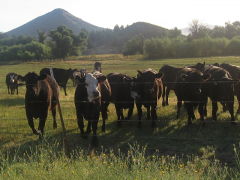 Summary:  Knowledge of which traits are antagonistic can be utilized to manage the impact of selection decisions on other correlated traits.  However, it is important to remember that although genetic correlations can sometimes create the need to exercise more care in selection to alleviate unintended consequences, these correlations can sometimes be utilized to our benefit.  Understanding the magnitude and direction of genetic correlations can assist in selection decisions.  Utilizing balanced selection for multiple EPDs in a breeding objective or using an appropriate selection index will ensure that genetic antagonisms don’t become a limiting factor for genetic progress.

It is important to remember that selection decisions in livestock often impact other traits which may not otherwise be under selection.  These unintended consequences are a result of relationships that exist between traits, which can be described by a genetic correlation.

What is a genetic correlation?

A genetic correlation provides information on whether two heritable traits share genes and they range from 1 to -1.  In reality, correlations are rarely 1 or -1.  They are generally somewhere between these values.  If two traits are not correlated, they are controlled by different genes within the genome and their genetic correlation is zero (Figure 1, panel A).  Uncorrelated traits should be completely independent and selecting for increased genetic merit in one trait should have no impact on the other trait.  If they are correlated, it means that selection on one trait will cause changes in the other.  If one considers traits that are genetically correlated, such as weaning weight and yearling weight, this concept is fairly straightforward, because genes that control growth at one stage of an animal’s life would be logical candidates to impact growth at a later stage in their lives.  The genetic correlation could be very large (closer to 1 or -1 than 0) as is the case between growth traits, with most genes being shared between the two traits with fewer genes that can be selected for independently (Figure 1, panel C), or very small (near zero), where few genes are shared between the traits and the majority of the genes that impact trait one are independent of trait two (Figure 1, panel B).  When selecting for a trait that is highly correlated to another trait, we can expect substantial changes in the other trait simply due to the strong genetic correlation between the trait we are selecting on and the trait to which it is correlated. For two traits with a low genetic correlation, selection on one of the traits has an impact on the other, but to a lesser degree.

As one might expect, carcass attributes that tend to aggregate a variety of phenotypes, such as quality grade and yield grade, are correlated to their component traits.  For example, marbling and quality grade have a positive favorable correlation, and yield grade and ribeye area have a negative favorable correlation.  Carcass traits also share favorable genetic correlations with ultrasound measurements of carcass merit, which means that ultrasound measures on yearling seedstock animals can be utilized as indicator traits for genetic evaluation of carcass merit.

Genetic correlations also exist for traits within the cowherd.  For example, milk production and maintenance energy have an antagonistic relationship.  Antagonistic relationships also exist between growth traits and mature size.  As increased growth is selected for in calves within a herd that keeps replacement females, mature size can inadvertently increase, which increases maintenance energy in the cowherd.  These examples all show that selection rarely happens in a vacuum, so it is important to be aware of all of the traits that are relevant in a particular herd and jointly select for merit in all the economically relevant traits in the breeding objective to overcome the effects of genetic antagonisms.

Genetic correlations can have several different causes.  The first of those is pleiotropy, the case where one gene impacts multiple traits.  Sometimes this gene acts favorably on two or more traits, and sometimes it creates an antagonism.  An example of this is the DGAT1 gene.  One of the alleles (form of a gene) for DGAT1 increases milk fat, but has a negative impact on milk yield.  In a population highly selected for milk yield, we would expect this allele to be at low frequency.  In a population highly select for milk fat, we would expect the opposite to be true.  These types of relationships that contribute to genetic correlations cannot be “broken” or separated because it’s a single gene impacting two or more traits.  However, genetic correlations can also be caused by genes that are close together on the same chromosome.  Because they are close together on the same chromosome, they tend to be inherited together.  As a favorable allele for one trait is selected for, the alleles next to it also get selected for and tend to be inherited together.  These types of genetic correlations (or genetic antagonisms) can be “broken” or separated over time by selecting for genetic merit in the two traits simultaneously.  Another option is to utilize selection indexes, which can break up genetic antagonisms, or unfavorable genetic correlations, over time due to their emphasis on appropriate weighting for all traits (including those with antagonistic relationships) in one selection tool.