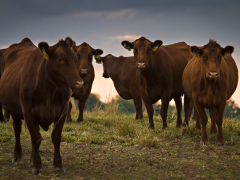 Traits that are of the most economic value to self-replacing herds are reproductive traits including age at first calving, reproductive success and reproductive longevity or stayability. These maternal traits are sex-limited, lowly heritable, and some are expressed quite late in life. This has precluded direct selection on these traits when selecting commercial replacement heifers, and impeded genetic progress.  In fact, the antagonism between carcass traits and some maternal and calving traits may have led to negative progress (e.g. carcass weight is positively correlated with mature weight), as positive selection on the terminal traits can result in negative selection on the maternal traits.  Improvements in reproductive performance can be up to 4-fold more important in terms of the bottom line than improvements in end-product traits in a conventional cow-calf operation selling market calves at weaning.

Selection is frequently driven by size, as an indicator of age; smaller heifers are often the ones that are born late(r) in the calving season and are too immature to be cycling in time for the first potential breeding season. Commercial producers typically select on at least a visual estimate of a heifer’s yearling weight, in addition to a visual evaluation of structural soundness. If increased size is due to age then this will put indirect selection on fertility traits of the dam (e.g. early calving), however if increased size is due to genetics for growth then it can lead to inadvertent selection for increased mature weight. Ideally animals born in the first 21 days of the breeding system would be selected, however commercial producers often do not record birth dates and so have to estimate the likely birthdate based on the size of the calf.

DNA testing offers an appealing approach to provide previously-absent selection criteria. Theoretically, DNA tests are ideally suited for traits where there is no other tool available for selection. Ironically, research shows that DNA tests for lowly heritable traits will be the most difficult to develop. That is because a very large amount of data (e.g., a large number of performance records) will be required to develop accurate DNA tests for lowly heritable traits. Additionally, such tests will also be the most difficult to evaluate as there is a shortage of cattle populations with sufficient phenotypic data to estimate the accuracy of new genomic tests for those traits.

It was shown early on that 50,000 SNP (50K) DNA tests developed using information from one breed have low predictive ability in other breeds. This is thought to be due to the fact that much of the accuracy of genomic breeding values results from the effect of large chromosome segments that segregate within closely related animals in one breed, but not across breeds.

Practically this means that each breed needs to develop their own database of phenotyped and genotyped animals. There are a number of breeds (Angus, Brangus, Charolais, Gelbvieh, Hereford, Limousin, Red Angus, Simmental, and Santa Gertrudis) that have done this by genotyping at least one thousand, and in some cases tens of thousands, of animals with EPDs and phenotypic records to develop DNA tests that are accurate for genomic prediction within those breeds.  This genomic information is starting to be incorporated into National Cattle Evaluations and the resulting “genomic-enhanced EPD” have increased accuracies, especially on young animals. For more information see “How DNA Testing Will Affect the Accuracy of EPD Information” factsheet at eBEEF.org.

When making selection decisions to improve fertility it is important to remember that genetic gain in herds is predominately driven by sire selection. Although it may seem intuitive to focus on female selection to drive fertility, bulls are where selection focus should lie. That is because sires have a larger number of offspring per year (approximately 25-35) than females who typically have a single calf per year. Figure 1 shows that 87.5% of genetic composition of the calf crop is determined by the sires used over the last 3 generations. There are some EPDs directly related to fertility including heifer pregnancy and stayability.

Use of Genomic Information

The value of using DNA information in making replacement heifer selection decisions will depend upon the information available at the time of selection (e.g. phenotypic measurements, parentage data, EPDs), the accuracy of the test with regard to the selection objective, and the replacement rate.  Typically only a subset of heifers are replacement candidates due to size, other selection criteria (e.g. feet and legs, disposition), and replacement rate (i.e. what proportion of replacement heifers are selected to return to the herd each year).  If EPDs are known on the sires of your replacement females then you have an estimate of half of their  genetics. Therefore, parentage testing for sires can be a very useful genomics tool to assist in heifer selection and is much less expensive than genomically testing all of the heifers.

To illustrate the interplay between accuracy, heritability and phenotype, consider a test that explains a quarter of the genetic variation (meaning the test has a correlation (r) of 0.5 with the true breeding value) in a lowly heritable trait like heifer pregnancy rate (h2 = 0.1). Although this test would be considered quite predictive for a lowly heritable trait, it would be expected to explain only 2.5% of the phenotypic variation in that trait.  While it is important to select sires according to their genetic potential, in the case of commercial replacement heifers their readiness and ability to conceive in the proposed breeding season is important, and this includes both their genetic potential and also the environmental factors to which they have been exposed.

Independent estimates of the accuracy of genetic tests are not available for all breeds and tests on the market. To date, data suggest that tests trained and developed for use in one breed are unlikely to work well in a different breed, or in a commercial crossbred population. Many papers have documented it is very difficult to develop genetic tests that have a correlation (r) of greater than approximately 0.2 for commercial crossbred populations. Unfortunately there are not yet any independent, peer-reviewed papers in the scientific literature documenting the field performance of genomic tests for commercial heifer selection.

The maternal trait with the highest relative economic value in that index was weaning rate (i.e. number of calves weaned per cow exposed). A hypothetical DNA test with an intermediate accuracy (0.3) with regard to the selection objective was then modelled. The breakeven cost of testing replacement heifers was approximately $24 per test. In other words, to test all of your potential replacement heifers the cost of the test would need to be under $24 for it to provide a positive return on investment assuming the accuracy of the test is 0.3. As the accuracy of the test increases, the breakeven cost will decrease. Of this value, less than $10 was associated with traits of economic value to the cow-calf sector (i.e. cow-calf producer that does not retain ownership), with the majority of the value being realized by post-weaning genetic improvement (i.e. feedlot/carcass traits).

If we consider that producers are likely to have at least a visual estimate of weight, and possibly some information on the age of the heifer, utilizing this information would further decrease the breakeven value of the information provided by genomics testing. The value of obtaining a commercial replacement heifer genetic evaluation is significantly less than that for bulls because bulls produce more descendants from which to derive returns for accelerated genetic improvement. The breakeven estimate of $24 per test does not take into consideration the possibility of reallocating those funds for improved bull selection. For the herd with 45 replacement heifers the potential investment would be $1080. The question becomes, which is better, investing more in the sires that will produce the future replacement heifers or spending the money on a tool to improve the selection of the current crop of replacement heifers?

It should be noted these calculations are based on the value of genomic information to make heifer replacement decisions in a commercial beef herd. The dairy industry is successfully using genomic testing on commercial replacement females. However, there are some important differences between the dairy and beef industry that make genomic testing of commercial replacement heifers a more cost-effective proposition in the dairy industry. The first is that most dairy cattle are straightbred and highly related to mainstream purebred genetics, and there are high accuracy genetic tests available for all traits in the selection index ($NetMerit). Culling rates on modern, well-managed dairy operations tend to be low, and widespread use of sexed semen has generated an excess of replacement heifers.

Dairy producers are using genomic information to make decisions such as keeping versus culling heifers, flushing exceptional heifers, breeding certain high-value heifers with sexed versus conventional semen, and breeding with dairy versus beef semen. There may be some opportunity to use genomic testing of beef heifers in analogous ways, although the value proposition will need to be considered for each operation.

It is important to remember the value of crossbreeding for fitness and survival traits such as longevity, lifetime production, and reproduction rate. Improvements in cow-calf production due to heterosis result from both the improved maternal performance of the crossbred cow (conception rate, percent born alive, percent weaned, age of puberty, milk production and increased longevity) and individual performance of the crossbred calf (percent born alive, percent weaned, weaning growth). Research from the US Meat Animal Research Center (USMARC) reported that the lifetime production of reciprocal-cross and straightbred cows of the Hereford, Angus, and Shorthorn breeds showed the lifetime production of weight of calves weaned was increased by about 36% due to the effects of heterosis. This was broken down into direct effects on crossbred calf survival (+4.9%) and growth (+3.8%), and maternal effects on weaning rate (+6.2%), increased weaning weight of progeny due to the crossbred dam (+5.8%), and longevity (+16.2%) of crossbred cows.

Choosing the right management tools to make genetic improvement in the beef herd is critical to economic viability. Taking advantage of heterosis, along with good sire selection decisions are proven means of positioning the herd for profitability. It is important in genetic management, as in all other management practices, to weigh the cost/gain balance of available tools. For every dollar invested you should expect at least an additional dollar in return. To determine what that value is in regard to commercial heifer selection using genomics is complicated and involves many factors. Under current market conditions and technologies and in the absence of any other information the value seems to be approximately $24 in retained ownership with replacement heifer operations, but closer to $10 in a market at weaning, retained heifer operation.