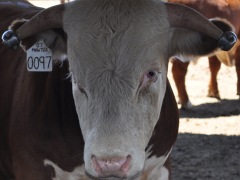 The Genetics of Horned, Polled

Summary: Completely avoiding both horns and scurs in your cowherd is near impossible for most commercial cattle producers. Understanding how we get polled and horned cattle is relatively simple and a genomics test can tell us if an animal is a carrier of the horn allele or not. Unfortunately, the presence or absence of scurs just barely scratches the surface of providing an understanding of what is happening genetically, and problematic in that there is not a genomics test to assist in developing a breeding strategy to eliminate scurs. When managing a breeding program to minimize these conditions it is critical not to complicate the situation more by introducing myths and misconceptions. Understanding the relationship between polled, scurred and horned cattle is the first step in developing a successful breeding program to eliminate horns and reduce scurs.

The genetics association with horned, scurred and polled cattle can be confusing and we still do not know all of the answers (see Illustration 1.). This factsheet will try to clarify some of the misconceptions associated with these conditions and discuss strategies for minimizing the horn and scur condition.

Horned feeder calves are not desirable; they are potential hazards for other cattle and the humans working them. For this reason calves with horns are discounted at the sale barn and even though scurs pose no danger to other cattle or humans they are still discounted by many buyers. To minimize these discounts beef producers attempt to use breeding techniques to generate polled cattle or physically dehorn/de-scur their calves. If you plan to breed for polled cattle it is important to understand the genetic action of the poll/horn gene, however, you will learn that avoiding horns is relatively easy, but avoiding scurs can be much more difficult.

This factsheet will describe the inheritance mode of the poll/horn gene and discuss what is known about the scur trait. Additionally, strategies for developing a breeding plan to eliminate horns and minimize scurs will be discussed.

In most cattle the horn/poll gene action is simple recessive with the poll allele (P) being dominant to the horn allele (p). Every parent has a pair of alleles at each gene and they pass on one of these alleles for each gene to their calf; the calf gets one allele from the bull and one allele from the cow to make its pair. What this means is that if a calf gets a polled allele from either parent then it will be polled. If it gets two polled alleles it is considered homozygous polled; if it gets one polled and one horn allele it will be physically polled, but it will be referred to as heterozygous polled or a carrier; if it gets two horned alleles it will be homozygous horned and will be horned. See Diagram 1.

It has been speculated, but not proven, that there is another gene, called the African horn gene, that can interact with the normal poll/horn gene causing it to be sex influenced (Long and Gregory, 1978). This proposed gene has been associated with Bos indicus cattle. If this gene does exist, this is a possible explanation when a bull is tested homozygous polled and has a horned bull calf there is a slight possibility that the African horn gene was introduced somewhere in the calf’s pedigree and not necessarily a mismatched mating or incorrect genomics test. Since there is no research to support the existence of this gene it will be disregarded for this factsheet.

Reference to poll up until this point has been considering the absence of horns. Cattle can also be scurred which will be discussed next.

Horn growth would make it impossible for scurs to develop at the same spot but horned animals can carry the gene for scurs. Unlike the poll/horn trait, scurs is not a simple recessive trait and is not completely understood! It has been hypothesized that scurs is a separate gene to the poll/horn gene on Chromosome 19, but interacts with the poll/horn gene, and that gender also has a possible influence on this trait. It has also been theorized that scurs are simply a condition of the poll/horn gene that is gender influenced (J. Decker and J. Taylor; University of Missouri, personal communication). It has been shown that, regardless of the cause, the scur condition can only happen in heterozygous polled cattle, of either sex (Asai-Coakwell and Schmutz 2002; Wiedemar, et al. 2014). The data also support that males develop the scur condition at a higher rate than females. Long and Gregory postulated that this was due to males expressing scurs when either homozygous or heterozygous for the scur allele and females only have the scur condition when homozygous for the scur allele. However, if there is no actual scur gene (i.e. separate DNA region corresponding to scur), but a sex by poll/horn gene interaction, it is theorized that male hormones could play a role in heterozygous males having an increase in the scur condition compared to heterozygous females. Since the sex-scur relationship is unknown the recommendations in this factsheet will reflect expectations in regard to the occurrence of the scur condition.

The condition that is obvious is that horned cattle (pp) cannot have the scur phenotype. If cattle have the genotype for the horned condition (pp) they will always be horned. For cattle to develop scurs, it must be a horn allele carrier (Pp) and have some other unknown genetic influence, realizing that male calves will tend to develop scurs at a higher rate than females. For cattle to be smooth polled it must be either homozygous (PP); or heterozygous polled (Pp) without the unknown genetic influence that allows scurs. Diagram 1 shows all possible combinations of the poll/horn alleles and where scurs can occur.

There are genomics tests available to determine if polled cattle are carriers of the horn allele, but there are currently no genomics tests for the scurs. From a practical standpoint, if you have cattle that develop scurs then it is known that they are carriers of the horn allele and testing is not necessary, however, the lack of scurs does not conversely mean that they are not carriers, they would need to be tested. A common misconception is that a homozygous polled bull shouldn’t have scurred calves; while it eliminates the possibility of horned calves and reduces the incidence of scurs, they can still occur. If he is bred to cows that have the horn allele then it is possible for him to produce scurred calves. Bottom line, it is easy to breed for polled cattle, buy a homozygous polled bull and you will not have any horned calves (double polled is not the same as homozygous; see glossary). Scurs, as you now know, is a completely different story; buying homozygous polled bulls will assist in reducing the incidence of scurs, since the horn allele is necessary to produce scurs. Until the genetic cause of scurs is determined and a genomics test for the scur allele is developed, if in fact scurs is separate gene to the poll/horn gene, then scurs will be difficult to eliminate.

Alleles – The possible forms of genes (i.e. poll and horn alleles) at a locus. Because genes occur in pairs, one gene of a pair may have one allele and the other gene of that same pair may have a different allele.

Carrier – An animal that has two different alleles to make up its pair of genes, both the poll and horn alleles (Pp). The dominant allele (poll) masks the existence of the recessive allele (horn) so it is polled, but it carries the horn allele and can pass it on to its calves.

Dominant – Masks the characteristic of the recessive allele. Characteristic is expressed in full if either homozygous or heterozygous (i.e. poll is dominant to horn).

Double Polled – Refers to mating a polled bull to a polled cow, and producing a polled calf. It is incorrect to assume that this calf is homozygous polled; one or both parents could be carriers, and if only one horn allele gets passed to the calf it will be a carrier.

Gene – A gene is a specific section of DNA on a chromosome that serves a biological function. Two copies of each gene exist in an animal. Only one gene of each pair is randomly transmitted to the offspring; the offspring gets one gene from each parent, thus giving it a pair.

Genotype – The genetic makeup of the animal.

Horned – The presence of horns that are attached to the skull.

Inheritance Mode – The passing of genes from parents to offspring and how they are expressed.

Locus – Location on the chromosome where a specific gene resides.

Phenotype – The physical appearance of the cattle. For the purposes of this article there are 3 possibilities: smooth polled, scurred or horned.

Polled – Absence of horns (can be scurred).

Recessive – Is completely masked if paired with a dominant allele. Is only expressed if homozygous (both alleles are recessive).

Scurs – Horn-like tissue that are attached to the skin rather than the skull. Can vary in size from small growths to small hornlike structures.

Smooth Polled – Absence of both horns and scurs.