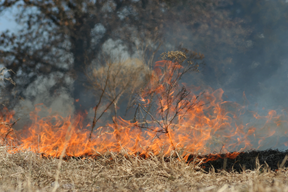 Troublesome pests such as ticks can be controlled with fire. However, for most parasites, control by fire lasts only for one growing season post-burn.

Many tourism areas suffer economic loss because of the public’s perception of ticks and other pests in parks, campgrounds, and other recreational facilities. Ticks pose a serious health risk to humans, pets, livestock, and wildlife because of the diseases they can carry. Rocky Mountain spotted fever, Lyme’s disease, and other infections can be transmitted to humans from ticks. Domestic animals can also contract fatal diseases from ticks. Decreased livestock production from insect borne illnesses can also cost livestock producers thousands of dollars each year.

Current research suggests patch-burning (patch-burn grazing) significantly reduces ticks on domestic livestock. When a patch is burned, the livestock follow the fresh burned areas and camp out on those areas until another patch is burned. Burning the patch kills the ticks, removes their habitat, and limits the livestock’s contact with ticks because they are concentrated on the burned area. Since the livestock follow the burns, they remain in areas with fewer ticks.