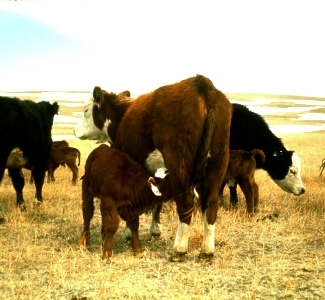 Find out how the trace minerals in your cow will play into reproduction.

The previous two columns have emphasized why trace minerals are important and what symptoms develop when the beef animal is deficient. This month’s column is aimed at reviewing studies that have shown positive effects of trace mineral supplementation on uptake by the liver and reproduction in cattle.

Are there differences in the chemical form of trace minerals on bioavailability?

Traditionally, supplemental trace minerals have been supplied to livestock in the form of inorganic salts: sulfates, oxides and chlorides, such as copper sulfate or copper chloride. The use of organic trace minerals has increased due to reports of improved feed efficiency, growth, reproduction and immune response. One study showed that the bio-availability of zinc proteinate was 159% of the bio-availability of zinc sulfate in rats, while another study showed that zinc methionine had 300-400% the potency of zinc sulfate in young channel catfish.
Work by Jerry Spears from North Carolina reviewed the effects of feeding zinc methionine to cattle and reported improved performance, carcass quality and immune response.

The following table, developed by Wayne Greene from Texas A&M, compares the bio-availability of several trace elements from different sources.

Workers at the University of Kentucky found that if they supplemented too much zinc in a diet, they decreased the utilization of copper. Montana State University workers also found this to be the case when they compared liver retention of copper after 90 days in heifers fed high levels of zinc.
These results suggest that copper supplementation alone increased liver copper concentrations 24%. However, if we supplemented only zinc, this actually reduced liver copper concentrations by 41%. By supplementing both copper and zinc, liver copper levels increased 100% over the 90-day experiment. These results indicate a need for balanced mineral supplements rather than single element supplementation. We believe the zinc to copper ratio needs to be between 3:1 and 5:1.
What are the effects of trace mineral supplementation on reproduction?

Supplementation reduced the percentage of uterine infections, embryonic mortality and endometrial scarring, and improved the post-partum involution and tone of the pregnant horn. Connie Swenson, as part of her PhD project at MSU, supplemented Cu, Zn, Co and Mn in either the inorganic-sulfate form or in an amino acid-complexed form to first calf heifers. Her findings are listed below:

Results from her research showed that even though the significant structures and the percentage of cows exhibiting estrus by day 45 were lower when complexed minerals were supplemented, the percentage of cows bred by AI was numerically improved.
The results of a second study by Swenson showed that the time from calving to conception was reduced by 10 days in first calf heifers supplemented with amino acid complex forms of Cu, Zn, Mn and Co compared to sulfate forms and controls with no additional trace minerals.
An interesting study by Tim Stanton from Colorado State University showed that supplementing a high level of inorganic trace minerals actually decreased weaning weights of calves. A lower level of inorganic or a high level of organic minerals resulted in heavier calf weaning weights and more cows becoming pregnant after artificial insemination.

d,e Within a row, means which have unlike superscripts differ (P<0.05).