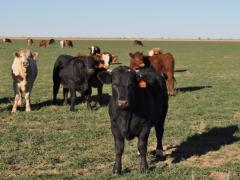 For production traits the best tools for making selection decisions are Expected Progeny Differences (EPD). Expected Progeny Differences are computed for many quantitative traits, traits controlled by many genes (polygenic) and affected by the environment, that have economic importance to beef producers. There are also simply inherited traits which are traits that are controlled by a single gene and often with one allele being dominant to the other. Some examples of traits that are simply inherited with complete dominance are red/black coat color, horned/polled and lethal defects. This fact sheet will discuss simple inheritance and how to effectively manage traits controlled by one gene.

For simply inherited traits one allele completely masks the expression of the other allele when the alleles are heterozygous for the gene.  This results in heterozygote animals having the exact same phenotype as homozygote dominant animals.  This is the type of dominance we see in red/black coat color, where black is dominant to red.  Cattle that have two black alleles are black (homozygous dominant), cattle that have one black and one red allele are also black (heterozygous), and red animals are the result of having two red alleles (homozygous recessive).  When dealing with traits with complete dominance, heterozygous animals are often called carriers because they are carrying the recessive allele and can pass it to their offspring even though they do not express the recessive phenotype themselves.  That is why it is possible to breed two black animals and get a red calf; each parent was a red allele carrier.

Coat color is a good trait to demonstrate how alleles interact in a trait with complete dominance.  For this example, we will mate an Angus bull to Hereford cows.  The Angus bull is homozygous dominant, which means he has two black alleles (BB).  The Hereford cows are homozygous recessive, which means they have two red alleles (bb).  When mated, all offspring will be heterozygotes (Bb).  The Punnett Square in Figure 1 illustrates this mating.

Traits controlled by one gene, with complete dominance, are easy to understand, but can cause problems because of the possibility of carriers.  For some traits, the only way to detect carriers is through progeny testing, which is costly and time consuming.  However, with advancements in molecular technologies, carriers can be identified for many traits by conducting a DNA test on a tissue sample. The simplest way to avoid having homozygous recessive calves is to always breed to a homozygous dominant bull. With this breeding strategy, even if you have the undesirable allele in your herd it will never be expressed because only homozygous dominant or carrier calves will be produced. This strategy can improve markets in the case of the red and horn allele, and increase reproductive rates when lethal alleles are involved.  The eBEEF fact sheet “Genetic Defects” (2014-9) and “Managing Genetic Defects” (2014-10) may provide useful supplemental reading on the inheritance of genetic defects.