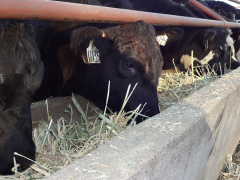 Feed efficiency is one of the most economically important traits in beef production and is sufficiently heritable to respond to genetic selection. However, selection for feed efficiency requires measuring the amount of feed consumed by individual animals. Currently, this is done in both research and industry settings in special facilities with electronic equipment designed specifically for this purpose. The high cost of measuring feed intake is primarily due to facility and labor costs and severely limits the number of animals measured both in research projects and by cattle breeders. It has been proposed that the cost per animal could be reduced by shortening the period of time the animals are in the facility.

Previous research has shown that the feeding period could be considerably shorter without significantly reducing the accuracy of measuring feed intake, but that the shorter period is not sufficient to obtain an accurate measurement of the animals’ weight gain that coincides with the feed intake. Therefore, it has been further proposed to use feed intake measured over a short period along with weight gain over a much longer period together in an index to estimate feed efficiency.

One of the arguments in favor of this “decoupling” approach is that there are many more records of postweaning gain available than of individual intake and that including postweaning gain in the index can extend selection for feed efficiency beyond the animals recorded for intake.

Individual feed intake and weight gain data on 6,331 beef cattle were used to retrospectively evaluate this proposal under a variety of assumptions. The analyses confirmed that feed intake measured over a shorter period is nearly as accurate as when measured over a longer time. However, the analysis included weight gains over both the same period as the feed intake was recorded and over a much longer time period. The best predictions resulted from using both the short and long measures of weight gain together with feed intake to predict feed efficiency.

Estimates of the genetic correlations between postweaning gain and the indices of efficiency depend on the assumed economic value of intake relative to gain, but were generally near zero. Using an abundance of postweaning gain records on relatives is effective in improving the accuracy of gain paired with feed intake records, but it does not substitute for intake records in extending genetic evaluation of feed efficiency beyond those animals with recorded feed intake.

It is recommended to include gain over the period coinciding with intake recording and gain over a much longer period of time simultaneously. It is further recommended that genetic evaluations of feed efficiency be based on multiple trait analysis of all 3 of these traits and reported as part of a more comprehensive economic index over those 3 traits, as well as other economically relevant traits.

Breed effects on feed efficiency are summarized in Table 1.