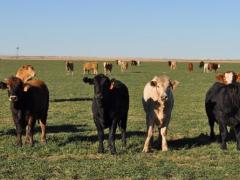 Single-step genetic evaluations have become a reality for several beef breed associations, with the expectation that more will adopt single-step predictions in the near future.  Single-step refers to the incorporation of genomic data in the form of genotypes, along with pedigree and phenotypes, into a genetic evaluation to produce EPD.  This differs from the way genomic data were historically incorporated into EPD.  In the past, breed association either used a correlated trait approach or blending.  In both of these cases, marker effects were estimated in a training set, evaluated in another set of animals, and the resulting prediction equation was applied to newly genotyped animals.  This was the process used to calculate the Molecular Breeding Value (MBV) that was then either fitted in multiple-trait models (correlated trait approach) or used to blend together with the traditional, pedigree-based EPD to create genomic-enhanced (GE)-EPD.

The benefit of having moved to a single-step implementation for genomic selection is that it results in a more accurate accounting for the influence of genomic data on the resulting EPD.  Research has shown that single-step methods reduce the bias that was observed using the two historical MBV-based approaches detailed above. The improvement in EPD accuracy from utilizing genomic data in a single-step evaluation is a result of the ability to better estimate the relationship between individuals.  For example, based on pedigree information alone, the expectation of the relationship between an individual and its grandparent is 0.25.  However, in reality this relationship is represented by a bell-shaped curve centered at 0.25 but with a range between 0 and 0.5. Using genomic data, a more accurate estimate of this relationship can be obtained. This refinement in estimating relationships is a result of better capturing of the similarities between animals at the genomic level and results in more accurate estimates of genetic merit.

Although the American breeds were the first among U.S. beef breed associations to utilize a ‘single-step’ evaluation, for the other breed associations the adoption of this method is a substantial change. Single-step GBLUP, as currently implemented, uses approximately 50,000 SNP and assumes that each SNP is equally informative relative to estimating relationships between individuals.  The hybrid model, as implemented, selects approximately 2,500 SNP that are estimated to be the most informative from the full 50K assay and then uses only this selected subset in national cattle evaluation (NCE), allowing for some markers to have more influence on the genetic merit estimates of animals compared to other markers.

As beef breed associations implemented these changes, they also changed other components of their NCE including updates to genetic parameters (e.g., heritability), changes to economic selection indices (e.g., AHA), changes to the statistical models used to estimate EPD for several traits. In the case of multi-breed evaluations (IGS), changes were made to the way breed effects are estimated.

Below are some key changes that were made in addition to the change to single-step incorporation of genomic data.

Numerically lower accuracy—For breeds using the BOLT software (AHA, IGS) the accuracy values associated with EPD will go down in many cases.  This seems counterintuitive given that the EPD are actually more reliable. Lower accuracies occur because the methods previously used to approximate accuracy led to over-estimates and the new method to calculate accuracy provides more accurate values (think of it as more accurate accuracy).

Stayability (IGS)— IGS has published a multi-breed stayability via single-step for over a year.  However, it is important to realize that there are differences between the “new” and “old” stayability EPD. The new improved version uses a model that enables more data to enter the genetic evaluation and defines contemporary groups in a more sensible way.  This leads to re-ranking of animals, but also to more accurate estimates of the genetic potential for the most economically relevant trait of importance to producers who retain replacement heifers.

Sustained Cow Fertility (AHA)—New EPD for AHA that is very similar to Stayability discussed above.

Carcass—The carcass EPD take advantage of true carcass data, ultrasound data, and growth traits measured early in life. The addition of growth traits measured earlier in life to the carcass models has been made to multiple breed associations’ NCE including Angus, Hereford, and the IGS breeds to mitigate the issue of bias from sequential culling (culling only the “bad” animals that later have carcass data).

Weekly genetic evaluations—The American Angus Association has published weekly evaluations for some time and other breeds are now doing the same.

Economic indices—As the components of the indexes change (i.e., the EPD) the economic indexes also change. The American Hereford Association also revised their indices to include EPD for more economically relevant traits, and updated the economic parameters.  These changes will result in more accurate predictors of net profit differences between the offspring of sires.

Reduced range of EPD—For some traits, the range of EPD has been reduced.  This is particularly evident in the AHA and the IGS genetic evaluations. If you are comparing an animal’s EPD for a given trait before and after the new evaluation, be sure to also compare the percentile rank.  The EPD may have changed, but the relative rank in the breed may have remained very similar.

Breed effects—Given IGS performs a multi-breed evaluation, there was a need to correctly adjust phenotypic records for breed effects, and for the effects of heterosis with the goal of allowing the resulting EPD to be directly comparable across breeds. This also produces EPD that estimate only the additive genetic merit (i.e. heritable component) of an animal as a parent.  Currently, IGS estimates breed differences for most traits from their multi-breed database. The exception to this approach is for carcass traits.  In this case, the breed effect estimates for carcass traits are obtained from the U.S. Meat Animal Research Center’s Germplasm Evaluation Project.

There is a continued need for more records in order to continuously improve NCE. Breeders can help by submitting carcass data and female fertility records; this will improve the accuracy of EPD for these two suites of traits.  Additionally, animals with records for these traits should also be genotyped.  Genetic evaluations for several beef breeds currently suffer from a general lack of genotypes on female animals.  Consequently, genomic predictions for sex-limited traits become problematic. And yet another reminder, even in the era of genomic selection, phenotypes (observed performance records) are still king and producers must not stop or limit phenotypic data collection.