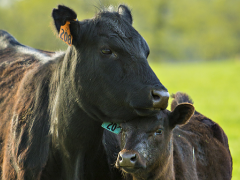 While the need to verify parentage for embryo calves may be obvious, the benefits of parentage testing outside of this unique situation might not seem quite so obvious.  Take a producer who runs multiple bulls in one pasture. Although all sires may have acceptable calving ease EPD, there may be some calving difficulty. Knowing the most likely sire of each calf allows producers to make more informed decisions relative to future grouping of bull batteries based on calf performance including potential calving difficulties.  Additionally, producers using AI followed by natural service sires may have some calves with birth dates that are too ambiguous to determine the sire, and the only way to determine this correctly is by using parentage testing.   This knowledge aids commercial producers who wish to retain only AI sired heifers as replacements or seedstock producers who rely on accurate pedigree information for EPD prediction.

The concept behind using genetic markers for parentage testing is based on the fact that each animal receives one copy of each gene, called an allele, from each parent.  We can genotype an animal to determine what markers they have and compare that to potential parents to determine if those markers are consistent with that individual being a parent of the offspring in question.  One common misconception of parentage testing is that the test confirms parentage absolutely based on matching DNA of offspring to their parents.  Rather, parentage testing is about excluding animals that cannot be the parents of a particular offspring, rather than proving that an animal is the parent.  In the simplest terms, we use the genetic markers to exclude animals as a possible parent, leaving those remaining (hopefully only one) as the most likely parent for that offspring.  To illustrate this concept, let’s look at an example.

There are three potential sires for a calf with a known dam.   For this example, we will be using 5 different genetic markers, in this case A through E, which we hope will be enough to exclude all but one of the possible sires.  We will genotype the calf, the dam, and each of the 3 possible sires on a parentage panel where each genetic marker can have 2 possible alleles (a capital or lowercase letter) and 3 possible genotypes (two capital letters, two lowercase letters, or one of each).  The results are shown in the table below (check marks indicate consistent inheritance).

In order to determine whether we can exclude one of the sires, let’s start with locus A.  If you’ll recall, animals get one allele (genetic marker) from each parent, so the first thing to do is to figure out which allele the calf possesses came from the dam.  At locus A, the calf’s genotype is Aa and the dam’s is AA.  Because the dam can only provide an A allele regardless of which chromosome she passes on, the calf’s A (pronounced big A or capital A) had to have come from the dam, which means that the a (pronounce little a or lowercase a) came from the sire.  If we look at the 3 sire genotypes at locus A, each one has at least 1 a allele, so any of them could have been the sire and we cannot exclude any of the potential sires.  Now let’s look at locus B.  The calf is BB, and the dam is Bb, so she had to have passed on her B allele to her calf.  So the other B allele came from the sire.  Sire 1 and sire 2 both have B alleles, but sire 3 does not, so we can exclude sire 3 as the possible sire of this calf.  If we continue this process for all 5 loci, we can see that the C locus doesn’t let us exclude any possible sires because they all have c alleles and the E locus is also uninformative for this parentage test. However, if we look at locus D, we can see that the dam passed on a D, so the calf’s d allele came from his sire.  The only bull with a d allele is sire 2, so sire 3 (which was already excluded at locus B) and sire 1 can be eliminated, and we could conclude that the most likely sire of the calf is sire 2.

In reality, parentage panels have many more than five genetic markers.  SNP (or single nucleotide polymorphism) panels, which are the newest type of parentage panel, typically have around 96 markers.  To account for genotyping errors, you can typically have one exclusion out of all the markers in the panel and still determine parentage.  Two to three exclusions would indicate a need to re-test the sample to rule out contamination, poor DNA quality, or poor genotyping results.  More than three exclusions will lead to excluding that animal as a potential parent of the animal in question.  Microsatelllite panels (an older type of parentage panel with a different type of marker), typically have a smaller number of markers.  New research has shown that parentage can be determined with greater specificity with a larger number of SNP markers (around 400), but at a greater cost.  A balance between cost effectiveness and having a reasonable ability to eliminate animals that could not have been the parents must be achieved.

1. Make sure your marker panels are consistent

Markers can be utilized across many genotyping products, such as the 50K, 80K, 150K, or a parentage panel alone.  However, it is important to remember that all of the animals being compared need to be genotyped with the same type of marker panel.  Older animals that might have been genotyped on a microsatellite panel might need to be re-genotyped on a SNP panel if the genotypes are needed for a parentage test on a younger animal.

2. It is essential to genotype all possible parents

If an individual that could have been a parent is not included in the comparison, it is possible that parentage may be incorrectly assigned. Ideally collect DNA from all herd sires BEFORE they go out with the cows for the breeding season.

3. Don’t include any animals that couldn’t possibly be the sire or dam of the individual in question due to their location or other factors

Because parentage testing is about excluding animals that could not possibly have been the sire or dam of the individual in question, you risk an inconclusive result if two or more individuals cannot be excluded.  This is more likely to occur if the animals are close relatives.  It results in an additional expense to genotype an animal that could not be a potential parent.  For example, even if you have run parentage panels on all of your herd sires, do not include all of them just because you possess the information, even though one or more might have been in different pastures and could not possibly have sired the calf in question.

4. Dam genotypes are helpful, but not essential, to determine the most likely sire of a calf

To illustrate this point, let’s look at the same example we used previously, where we determined that sire 2 was the most likely sire for this calf.  If we remove the dam genotypes, we can save the expense of genotyping the cow, and we can still exclude sire 3 because he does not have a B allele at locus B,  However, we cannot exclude sire 1 or sire 2 based on the information we have available.  We would either need to obtain information on a larger number of markers, or the test would be inconclusive.  This is why SNP parentage panels include a larger number of markers.  It is also important to note that dam genotypes can also be uncertain, such as when calves are switched at birth.

5. It is harder to resolve parentage when using related sires/animals

Because related animals tend to share the same chromosomes, and thus have the same genotype at genetic marker loci, it is harder to resolve parentage when potential sires are related.  This may be especially important to remember when using related sires (such as full-sib flush mates or half-sibs out of the same sire) in multi-sire pastures if your intention is to parent-verify the calves.  Because their genotypes are often similar, it becomes more difficult to exclude close relatives as potential sires, especially in the absence of dam genotypes.

Parentage testing can be utilized to confirm the accuracy of pedigrees and paternity information which is particularly useful information for embryo transfer calves and producers who utilize multiple sire mating pastures.  Understanding the basics of testing is important to understand how parentage testing might best be used in your herd.