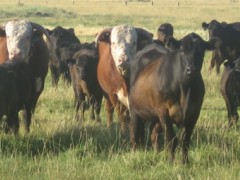 Developing a mating system that optimizes profitability for a commercial beef operation can be tricky.  There are many factors that must be considered including: heterosis, breed selection, selection tools, market, environmental/management conditions and simplicity.  To complicate the issue these factors do not function independently and there are interactions to consider.  As with all aspects of beef cattle management a game plan should be developed and implemented with the ultimate goal of profitability.

The revenue generating components of the beef operation should be a consideration for almost all decisions that will be made and developing a mating system is no exception.  The typical sources of revenue for most commercial operations are calves marketed in various ways, and cull cows and bulls.  Decisions that are made in developing mating systems can have huge impacts on both of these sources of revenue.

How the calf crop is marketed should be one of the major factors determining a mating system.  This can vary from selling weaned calves at the stockyards straight off the cow to retaining ownership and being paid on carcass value.  When considering these two extremes it is easy to see that the producers selling weaned calves would need to focus on reproduction and factors affecting weaning weight; the producers selling carcasses will also have to consider reproduction, but carcass quality and weight are now the value determinants for the product being sold.  The relative importance of maternal versus paternal traits is greatly influenced by when and how the calves will be marketed.

Another consideration would be whether the end target is commodity beef or a branded product.  With branded products there may be breed, color and/or production specifications that must be met.  All of these factors can be addressed with the proper mating system.

The marketing of cows and bulls is often overlooked when making management decisions, but can have a large impact on the operation’s net income.  Factors such as mature size and replacement rate determine how much income is generated through the sale of cull animals, but both of these factors have some significant consequences to be considered.  If replacement rates are high this is likely due to low reproduction rates since culling open cows is typically practiced in commercial operations; if that is the case then emphasis should be placed on improving the fertility of the herd within the constraints of the given environment.  The other factor of mature size is typically a secondary effect of genetics for calf growth; high growth calves typically develop into large mature cows and are produced by large bulls.  The management implication to be aware of is that larger cows have higher maintenance requirements.

Heterosis typically has the greatest impact on lowly heritable traits such as reproduction and longevity.  These traits have importance in all beef operations, but likely have a greater relative impact on a cow/calf operation that is selling calves at auction rather than one that is retaining ownership and being paid on carcass value.  The potential to improve weaned weight per cow exposed by approximately 20% through crossbreeding versus straight breeding is a powerful incentive to implement crossbreeding in the mating system for the cow/calf producer.  With the limited impact of heterosis on carcass traits, some retained ownership operations may be inclined to forego crossbreeding.  Although the impact of reproduction and longevity may be lessened somewhat in a retained ownership operation, they still have a significant impact on profitability and should not be ignored.

The genetic trends of the major beef breeds in the US indicate that the breeds are more similar for most production traits than they were historically.  Growth and milk have dramatically increased in the British breeds making them more similar to the Continental breeds and likewise the Continental breeds have placed negative pressure on birth weight to reduce the gap with the British breeds.  The impact on carcass characteristics is less clear, but most breeds have applied positive pressure to improve marbling.  It is critical to assess the positive and negative characteristics of the breeds being considered and find the balance that is optimal to meeting your market and management plans.

Once many of the other decisions are made regarding the mating system selection tools can be used to fine tune the process.  Management, marketing and crossbreeding decisions tend to be broad based and not targeted at individual aspects.  Selection tools on the other hand can be used to create the specific animal to fit a particular environment and be marketed in a specific way.  The traits under consideration for change are typically classified in one of two ways: quantitative or qualitative traits.

Quantitative traits are traits that are controlled by multiple genes and greatly influenced by the environmental conditions, including management.  These are typically the production traits, for example: growth traits, milking ability, fertility and carcass traits.  The relative impact of the genetic contribution to a trait is described by the heritability estimate.  These estimates theoretically range from 0 to 1 with higher values indicating a greater influence by additive genetics on the trait.  For most traits in beef cattle these estimates range from .05 to .50 (See Table 1).

For most economically relevant quantitative traits Expected Progeny Differences (EPD) are computed by the respective breed associations.  With the incorporation of genomics information this selection tool is becoming increasingly accurate in young animals.  With improved accuracies from genomic tests it is more critical than ever that producers use EPD correctly, which for many traits means selecting for the optimum rather than the maximum.

A selection tool that has been developed to assist in the process of optimizing for economic importance is selection indices.  A selection index allows the producer to select bulls based on an assortment of traits that have been economically weighted to indicate the bull that has the optimum combination of traits to produce the most profitable calves.  Selection indices greatly simplify the selection process for commercial producers, but care should be taken to be certain that the index selected includes the traits that are of economic importance to their operation and that their management/environmental and marketing conditions are similar to those used to develop the index.

Qualitative traits are those that are typically controlled by one pair of genes and are not greatly influenced by the environment.  Examples of typical qualitative traits in beef cattle are coat color and the horned/polled condition.  When considering these types of traits it is important to understand the inheritance mode of the trait.  For the two example traits, coat color and horned/polled, in most cases is controlled by simple recessive inheritance.  There are factors such as diluter genes for coat that can complicate things, therefore understanding how the genes work and interact is important when a specific outcome is desired.

Mating systems have to do with finding the right genetics, but this must be done in the context of the environment into which the cattle are going to be placed.  Matching the genetic potential of the herd to the production level of the operation is one of the most critical steps of developing a mating system.  Failure to recognize limitations in the resources being provided to the cattle can result in reduced performance; conversely, selecting genetics that under utilize resources results in inefficiencies and lost revenue.

The two management constraints that typically influence the breeding program are labor and nutrition limitations.  The amount of time (labor) that is dedicated to the cow herd during calving will have a significant impact on the level of calving ease that will be required of the bull.  If labor is limited during this time, and particularly if heifers are calving for the first time, then a greater level of calving ease direct will be required of the bull.

The nutrition level being provided to the herd may be a little more difficult to assess, but is critical to determine what level of production is appropriate for the herd.  The mature size of the cows and level of milk being produced will greatly influence the maintenance requirement of the herd.  Cows with high maintenance requirements, but limited available nutrients are not a good match and will result in a loss of condition with possible negative effects on fertility.  Low producing cows in a nutrient rich environment can become overly fat, potentially reducing fertility and certainly not getting the level of production appropriate for the resources being utilized.

As with most things, the simpler we can keep our mating system the more likely we are to stick to it.  Having a good understanding of all the topics discussed previously will be necessary to develop an appropriate mating system, but once in place it should be relatively easy to maintain.  The mating system should be target directed, but flexible to meet variable conditions.  Environmental fluctuations are a fact of life in many parts of the US and adapting to change is often necessary; early weaning can be necessary, but unless it is a permanent change it should not have an impact on the next herd sire that is purchased.  The same can be said about market conditions, even if your breeding program is directed towards retained ownership. Sometimes market conditions warrant selling earlier than expected; these are short-term financial decisions, but these short term fluctuations should not be the grounds for dramatically redesigning the mating system.