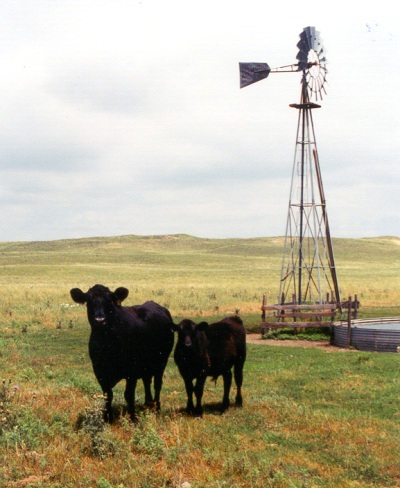 Do you want to receive more money for your calves this fall? Of course, we all do, the key is to receive a greater return than the investment. There are several critical success factors in every beef cattle operation; including managing cow costs, weaning weights and % calf crop. The most critical time period for opportunity to influence these factors is just prior to and after calving. Management decisions made during these time periods will greatly influence profitability of beef cattle operations. In this article I am going to discuss some management practices that can be implemented at this time and may result in heavier weaning weights and a higher % calf crop without dramatically increasing cow costs.
Before I go into specific management practices, we need to think about the importance of this time period, physiological changes in the breeding female and factors that might affect the success of the management practices being considered.

What influences how soon a cow cycles after calving? Nutrition the last 50-60 days prior to calving has a profound effect on cyclicity after calving, this is further exaggerated by body condition of the cow. A cow in moderate body condition (5-6) that loses weight precalving is much more vulnerable to postpartum nutrient levels than one in similar or even poorer condition that is gaining weight prior to calving (Table 1). Nutrition pre- and post calving is of critical importance to the postpartum interval. Calving difficulty and time of intervention; research from the Livestock and Range Research Station at Ft. Keogh indicates that cows that experience calving difficulty will take longer to cycle than cows not experiencing calving difficulty, therefore, it is important to minimize calving difficulty in your breeding herd. Time of intervention, when intervention is needed also effects cyclicity, Dr. Bellows from Ft. Keogh has indicated that for every 10 min beyond the time period which assistance is needed, 2 days may be added on to the period of time it takes a cow to cycle, therefore, early assistance, when needed, is important to assure cows return to estrus as soon as possible. The suckling stimulus from the calf has a negative effect on cyclic activity during the postpartum period, however, animals on a positive energy balance and in adequate body condition generally overcome this negative stimulus prior to the breeding season. Another factor that influences cyclicity is uterine involution, which is the time needed for repair of the reproductive tract so another pregnancy can be established. Uterine involution does not generally limit cyclicity unless disease conditions occur which delays normal involution.

What other factors affect the success of managing this critical time period? Response to proven management practices that shorten the postpartum interval may vary based on your particular situation. Body condition, level of nutrition, age of cows, milk production, weather, disease, parasites, and other factors will affect the ability to shorten the postpartum interval.
Nutrition is probably the easiest way to shorten the postpartum period. As mentioned previously, pre calving is equally important. Nutritional demands increase greatly in late gestation and even more in early lactation. Reproduction is of very low priority when nutrient partitioning is considered and that is why cows in thin body condition often don’t rebreed. It is of great interest to many scientists to identify what particular nutrients will “trigger” animals into cycling that normally wouldn’t. There is promising research at Ft. Keogh and other institutions indicating that supplemental fat may have such an effect. It appears that energy is the nutrient that most affects reproductive performance and increasing energy density of the diet has been shown to enhance reproductive performance (Table 1). Caution should be used with feeding great excesses of other nutrients at this time, protein is a good example, several scientists have shown that excess protein may be detrimental to reproductive performance in cattle because of increased urea content in the reproductive tract which appears to be detrimental to embryonic development.
Body condition is correlated to several reproductive events such as post partum interval, services per conception, calving interval, milk production, weaning weight, calving difficulty and calf survival (Table 3). Feeding the “herd” to increase cow condition has proven very ineffective and costly. Cows should be sorted by condition score and fed accordingly to maintain a moderate body condition of 5-6 in the herd (scale 1-9).

Ionophores such as Bovatec and Rumensin have been shown to influence reproductive performance during the postpartum period. Cows and heifers fed an ionophore exhibit a shorter postpartum interval provided adequate energy is supplied in the ration (Table 4). This effect appears to be more evident in less intensely managed herds that generally have a moderate (60-85d) or longer postpartum interval. Scientists have also demonstrated that heifers fed an ionophore reach puberty at an earlier age and a lighter weight.

Table 4. Effect of Ionophore Feeding on Postpartum Interval in Beef Cows and Heifers

Calf removal, either temporary or permanent can increase the number of cows that return to estrus during the breeding season, however, the response can be variable and management of this option can be difficult.
Estrus synchronization with progestins can bring cows into heat but will not solve fertility problems. These products may shorten the postpartum interval provided all other management practices such as nutrition and body condition are optimum.
Bull presence postcalving has been shown to cause cows to cycle earlier, this may be accomplished with an altered bull that isn’t capable of breeding if this practice is used prior to the breeding season.

In summary, there are several management practices that can assist in shortening the postpartum interval but none of these recommendations will take the place of good management. The first place to address this problem is with proper nutrition prior to calving and through the breeding season and managing for optimum body condition.
Management decisions made during these time periods will greatly influence profitability of beef cattle operations.