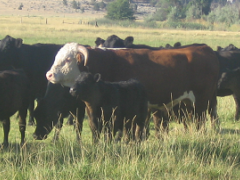 *The eBEEF fact sheet “Genetic Defects” (2014-9) is recommended reading prior to this fact sheet.

Summary: Inbreeding is associated with an increased frequency of homozygosity (same allele of a gene inherited from both sire and dam) and this reveals genetic defects when two copies of a genetically defective allele (aa) are inherited.  Affected calves can be avoided by careful mate allocation (i.e. avoiding the mating to carrier (Aa) parents).

With the advent of genomic sequencing technologies, our understanding of the prevalence of autosomal recessive conditions has advanced. Given that the average human carries approximately 2,000 deleterious autosomal recessive variants and  a similar number is likely to be found in cattle, entirely avoiding the mating of any carrier animals is going to become increasingly unworkable as more deleterious autosomal recessive variants are identified. While preventing all matings between carrier animals may not be possible, avoiding matings between animals that carry alleles for the same recessive condition is achievable.

Inbreeding is the mating of animals that are more closely related to each other than the average relationship in a population. Inbreeding tends to increase the degree of genetic homozygosity. Its main purpose is to make inbred animals more homozygous for superior genes; however, deleterious allelic variants become homozygous at the same time, unless such variants are homozygous lethal in which case there is obvious natural selection against them. Inbreeding results from one or more ancestors having contributed alleles on both the male and female sides of an animal’s pedigree. It is for this reason that deleterious autosomal recessive variants are often identified in the descendants of widely used sire lines.

It is not because sires with excellent genetic merit carry more deleterious variants, it is because such sires are more likely to be represented on both sides of a pedigree opening up the possibility that an animal will inherit a deleterious allele from both its sire and dam. In populations that have been inbred over a period of time, animals can become so related in general that matings between distant relatives may in fact be matings of animals with a large number of alleles in common.

The inbreeding coefficient is a percentage which expresses the degree of extra homozygosity, relative to the average of the population from which the animal came, in an inbred animal due to the relationship between its parents. Inbreeding promotes an increase in prepotency, with the ability of an individual to produce progeny whose performance is especially like its own and/or is especially uniform. This results from the increase in homozygosity. Because inbred individuals have fewer heterozygous loci  they cannot produce as many combinations of alleles.  The result is less variation in the offspring. However, it is also accompanied by inbreeding depression – the decline in average phenotypic performance that occurs due to inbreeding. This phenomena is well documented and has the greatest effect on reproductive traits, followed by growth traits. In beef cattle, inbreeding depression has been documented for many traits including percentage weaned, birth weight, preweaning gain, weaning weight, postweaning gain, and final weight. When the effect of inbreeding was assessed as a percentage of the mean, it was more pronounced for lifetime number of calvings, weight at three months, and productive longevity, intermediate for other reproductive traits and weights of calves, and not significant for feed to gain ratio, and carcass composition. In general life-history and fitness-related traits are the ones where inbreeding depression has a larger effect.

Before genetic testing, the only way to identify carriers of autosomal recessive genetic conditions was to perform a test cross with another known carrier and observe whether any of the offspring were homozygous affected. Perhaps the most famous example of a genetic defect in 20th century beef breeding was “snorter” dwarfism which became an issue in Angus and Hereford cattle during the 1940s and 1950s. This genetic defect was uncovered as a result of strong selection pressure for animals with small stature. Ultimately the cause of this mutation was traced back to a bull named St. Louis Lad, born in 1899.  A 1956 survey of Hereford breeders in the USA identified 50,000 dwarf-producing animals in 47 states. Through detailed pedigree analysis and test crosses, the American Hereford Association, in concert with breeders and scientists, virtually eliminated the problem from the breed. Because carrier status was difficult to prove and required expensive progeny testing, some entire breeding lines were eliminated. This situation can be contrasted to the speed with which genetic testing has allowed 21st century breeders to quickly and accurately determine the carrier status of their animals.

There are many management options for the control of genetic conditions and the best choice will depend on the needs and requirements of each enterprise. Some of these options include:

1. Testing all animals and culling carriers.

2. Testing all animals and using carriers only in terminal breeding  programs .

3. Testing sires and using only free bulls for breeding.

This last option will eliminate affected progeny and decrease the number of carriers over time. However in some cases, the overall breeding value of carrier animals may outweigh the economic penalty associated with their carrier status. Carrier sires and dams can be used for breeding.  However, follow-up testing of all progeny would be essential to develop future breeding strategies with that progeny, because we would expect 50% of their progeny to be carriers. These carriers can be identified by DNA testing. They may be culled, or used in a separate breeding programme with animals of identified negative or free status. The  negative status progeny can then be used to perpetuate phenotypically and/or quantitatively selected superior production traits. Continued breeding by mating two carriers risks the production of approximately 25% affected animals.

Crossbreeding offers another management approach to address deleterious alleles. First crosses are unlikely to produce any affected progeny (unless both breeds have the same deleterious allele), but there is a risk of increasing the prevalence of the defective gene in the carrier state. Subsequent inter-breeding of cross-bred animals therefore has the potential to produce additional carriers and affected cases.

The Angus breed has recently had to manage several simply-inherited, single locus recessive genetic conditions. These include two lethal conditions Arthrogryposis Multiplex (AM; “Curly Calf Syndrome”), and Neuropathic Hydrocephalus (NH). The first is caused by a chromosomal deletion that occurred in Rito 9J9 of B156 7T26, (AA Registration No. 9682589; born 29 October 1979). The second occurred as a result of a single DNA base pair mutation in his grandson, the widely-used GAR Precision 1680 (AA Registration No. 11520398; born 6 September 1990). The widespread use of this bull spurred on by an increased selection emphasis on carcass traits increased the probability of this bull showing up on both sides of many Angus pedigrees, thereby uncovering the presence of any recessive lethal mutations. The third condition is a non-lethal autosomal genetic defect called Congenital Contractural Arachnodactyly (CA; “Fawn Calf Syndrome”) that is caused by a deletion of around 54 kbp. An additional condition called developmental duplication (DD) was identified in 2013. This condition has incomplete penetrance, meaning that there are some homozygous affected animals that have no obvious phenotype. More information is available  at  http://www.angus.org/pub/dd/ddfactsheet.pdf.  Other breeds have their own suite of genetic conditions, as would be expected as all individuals carry deleterious mutations. The identification of such mutations increases when certain sires are used extensively such that deleterious alleles come together through inbreeding on both sides of an animal’s pedigree.

Genetic tests are available for many genetic conditions in different breeds.  The speed with which these genetic tests were developed is testament to the power of having access to the bovine genome sequence information, and is perhaps the greatest success story of genomics never told. The proactive response of the breed association in making genotypes available also helped to rapidly and transparently address the problem. It is important to realize that although genetic defects can be problematic for individual breeders, they do not have to be catastrophic for the industry. The sooner a defect is recognized and the genetic cause identified, the sooner breeders can use this information to avoid producing affected individuals and eventually reduce or eradicate the allele from the population.

The genetic status of a registered animal can be determined by looking at the breed association website. Different breeds report their results in a variety of formats but typically there will be information stating whether a tested animal is a carrier, an affected homozygote, or a free homozygote. For example, on the American Angus Site the designations are as follows:

A free “F” homozygote will not pass on the genetic defect, irrespective of the prevalence of that defect in their pedigree. Carriers will pass on the defective allele to half of their progeny. It is possible to estimate the likelihood that a potential carrier inherited a defective allele, but testing is the only way to confirm the true genotype of an animal for that locus.

Management of lethal recessive conditions that result in embryonic mortality requires special consideration. This case is important because unlike a calf born with an obvious physical deformity, these conditions manifest as fertility problems presenting as an increased calving interval or missed heat(s). From a genetic perspective there will be a statistically significant absence of living progeny homozygous for the allele. In several dairy cattle breeds this absence of homozygous genetic markers amongst thousands of genotyped progeny was used to identify several lethal autosomal recessive alleles that impact fertility.

Lethal conditions can be optimally managed through systems of mating. These constitute breeding plans that are designed to combine the genes in a population in the most advantageous genotypic combinations. For example mating a known carrier in one breed to cows from another breed will not result in any affected progeny, allowing the genetic merit of that carrier to be utilized without resulting in any affected progeny. Likewise carriers of two different recessive alleles at different genes can be crossed and will not produce any affected offspring. This concept of mate selection to optimize genetic progress while focusing on reducing the incidence of affected individuals is likely to become increasingly important as genomics identifies an ever-increasing number of deleterious  recessive alleles in domestic livestock populations.  Management of recessive conditions has to be balanced with other important issues such as the management of trait merit, genetic diversity, other genetic defects, genome-wide inbreeding, logistical constraints and costs. It is likely that decision support software will be required to facilitate the management of this information. The dairy industry has already developed some mate allocation and decision support software that allows breeders the opportunity to selectively use recessive lethal carrier sires that also transmit breed-leading profitable traits with cows that are free of the deleterious allele. These programs provide an approach to make judicious use of carrier bulls with superior genetic merit while avoiding the production of affected calves, and strategically work to slowly eradicate the allele from the population.

There are several groups throughout the world working on trying to identify the actual genetic cause of lethal recessive conditions. This is being done through sequencing the 3 billion base pair genomes of prominent AI bulls in many different breeds. Researchers are looking to identify mutations, and determine if there are “missing homozygotes” in the offspring of these bulls, suggesting the lethality of the mutations identified in the sequencing. These research efforts are likely to identify a large number of deleterious or lethal recessive alleles in beef cattle populations. Although such alleles may occur at low frequencies, their combined effect on fertility may be important and consideration of these known genetic conditions will likely be included in selection and breeding programs in the future. Decision support software will be essential to manage all of this information by providing an objective approach to appropriately weight the relative economic value of traits in the breeding objective against potential deleterious recessives, and suggest an optimal breeding scheme based on all of the available information.