Cow/calf producers have experienced some of the best times in recent history of the beef industry. Total calf inventory has been low and demand for calves has been high resulting in good calf prices. Anyone who has been in this industry for any length of time understands that the cattle industry is a cyclic industry where cow numbers expand and contract and cattle prices fluctuate. Even in good times, it is critical to explore opportunities to reduce costs. In considering nutrition programs for the young beef female, I’m reminded of the statement that the late Dr. Jim Wiltbank use to emphasize in his talks “if you are going to breed ’em you have to feed ’em.” It has routinely been recommended that heifers be developed to 2/3 of their mature weight before the start of the breeding season because puberty in beef females is a function of weight. In addition, in most cowherds, the highest non-pregnant rate occurs in females that are asked to get pregnant with their second calf and underdeveloped heifers at first breeding may be ones that are in a continual catch-up mode and be challenged for their next pregnancy.

Inconclusive results exist regarding the appropriate target weight, but also the appropriate time heifers should be placed with bulls in relation to the mature cowherd. It is a common practice to breed heifers before the rest of the cowherd so they have a longer post-partum period before the start of their second breeding season. This management strategy requires additional resources if heifers are developed to the same target weight, because an accelerated rate of gain is needed to reach the target weight earlier. 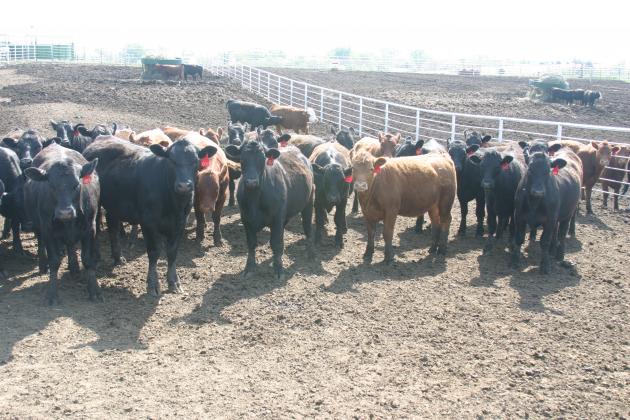 There are studies comparing development of spring-born heifers at two prebreeding target weights (55% or 60% of mature weight) and the effects on reproduction and cow and calf productivity. Heifers on the high-gain diet development diet gained 0.3 lb/day more than heifers on the low-gain diet (1.4 vs 1.1 lb/day) and cost $22/head more during the 155-day wintering period. At prebreeding, the high-gain heifers weighed 51 lb more than the low-gain group and had 0.4 unit higher condition score. The high-gain heifers were 57% of mature weight and the low-gain heifers were 53% of mature weight at prebreeding. The percentage of heifers cycling before breeding was 11% higher for the high-gain heifers (85 vs 74%). The 45-day pregnancy rate was not statistically different between groups (92 vs 88% for low and high gain heifers, respectively). Data for calving and weaning of the first calf, and reproduction (through fourth pregnancy) indicated high-gain heifers as cows were heavier at calving and weaning. These differences in heifer development weights carried over through the fourth pregnancy diagnosis. Average calf birth date, calf birth weight, calving difficulty, and calf losses were similar for both groups through three calf crops. Calf gain and adjusted 205-day weights were also similar for both groups of cows indicating milk production was probably similar. Percentage of cows rebreeding for their second, third, and fourth calves were similar for both groups. There were no differences in pregnancy or calve production data when heifers were developed at either 53 or 57% of mature weight. However, costs were increased for the high-gain group. Using crop residues to develop heifers corn residues are a relatively inexpensive feed resource, but are low in protein and energy, especially for growing calves, backgrounded for entry into the feedlot or for summer pasture, or for replacement heifers.

Beef producers often target a specific ADG, so it is important to know the amount of a supplement to feed to calves grazing corn residues in order to achieve a desired level of daily gain. Due to their high energy (112% TDN) and high protein content (30.1%) dried distillers grains (DDGS) fit well as a protein and (or) energy supplement in many grazing situations. Dried distillers grains (DDGS) were fed to weanling steer calves grazing nonirrigated corn residue to determine daily gain response and residue intake response to increasing levels of DDGS (from 1.5 to 6.5 lb/day in 1 lb increments; Gustad et al., 2006 Nebraska Beef Report; figure 1). The DDGS was fed individually using Calan electronic gates. Daily gain increased from 0.9 (1.5 lb DDGS) to 1.8 (6.5 lb DDGS) lb/day. Forage intake decreased from 11.3 (1.5 lb DDGS) to 8.3 (6.5 lb DDGS) lb/day. These results provide information for selecting a DDGS supplementation level to achieve a target gain. The ADG in this experiment are similar to ADG that many would target replacement heifers.

These data would suggest that heifer development costs can be reduced by designing feeding programs to target heifers to 55% to 60% of their mature weight before the start of the first breeding season. Heifers developed to lighter pre-breeding weights maintained adequate breeding performance during the second, third, and fourth breeding seasons. If you consider this type of heifer development program, you may want to retain more heifers into the program in case low rebreeding performance is incurred and overall cow numbers can be maintained. In addition, recently, females that do not get pregnant in their first breeding season have not been costly as the price of yearlings sold after the grazing season has been good. Finally, developing heifers using crop residues may be a means to reduce development cost and not impair reproductive performance. Replacement heifers developed on crop residues will need to be supplemented to achieve targeted ADG as residues are low in protein and energy. These management strategies can impact profit potential of the cow/calf enterprise.