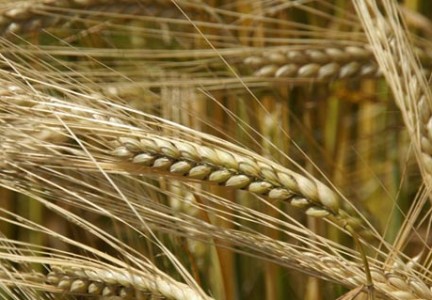 Find out what barley does and doesn’t do for your herd.

How Can I Use Barley in Diets for Beef Cows?

2. Ward et al. (1990a) evaluated the effect of rolled barley (3.0 lbs/hd/day) or monensin supplements alone or in combination on forage intake and digestibility with beef steers grazing native range in southeast Montana during June, July, and August. Rolled barley decreased forage intake but had no impact on forage digestibility. Total intake (forage + supplement) was not impacted by treatment.

5. Leventini (1990) investigated the effects of increasing levels of supplemental barley (10, 30 or 50% of the diet dry matter) and the addition of a ruminal buffer for steers fed brome hay diets in a 3 x 2 factorial design. Increasing the level of barley resulted in increased average daily gains and improved feed efficiencies. Ruminal buffer (sodium sesquicarbonate) had no effect on performance. Digestion of NDF decreased as barley supplementation increased.

Vomitoxin (DON, deoxynivalenol) is a trichothe-cene mycotoxin produced by Fusarium fungi in scab infected grain. While vomitoxin can cause problems in performance when feeding swine, no evidence exists that beef cattle are adversely affected. Research conducted at the NDSU Research Center in Carring-ton suggests that growing and finishing cattle can be fed vomitoxin levels up to 12.6 ppm in the ration without adversely affecting feedlot performance or carcass characteristics (Boland et al., 1994). No adverse effects were detected when vomitoxin-infested barley (36.8 ppm DON; fed at 8 lbs/head/day during gestation and 12 lbs/head/day during lactation) was fed to gestating and lactating heifers (Anderson et al., 1995). Two research trials conducted at the University of Minnesota indicate that up to 21 ppm DON in the diet can be fed to growing and finishing cattle without adversely affecting feedlot performance or carcass characteristics (DiConstanzo et al., 1995; Windels et al., 1995).

Research conducted at North Dakota State University with gestating and lactating ewes suggested that diets containing up to 25 ppm vomitoxin (DON) throughout pregnancy have no effect on weight gain in pregnant ewe lambs, reproductive performance of the ewe lambs, or survivability of the lamb crop (Haugen et al., 1996).

Impact of Test Weight on Feeding Value of Barley

1.The variety of barley selected by the grower and the growing conditions that the barley is subjected to during the growing season affect barley test weight (bushel weight). However, there does not appear to be a consistent relationship between barley test weight and feedlot performance of beef cattle. Some research reports indicate that animal performance is lower when lighter test weight barley is fed (Hinman, 1978). Hinman (1978) evaluated barleys weighing 42.0, 44.9, 48.9, and 50.9 lbs/bu and reported that animal performance increased as bushel weight increased.

3. Other research indicates a plateau effect once test weight is greater than 45.7 lbs/bu (Mathison et al., 1991b). Grimson et al. (1987) suggested that feeding value was reduced 0.93 percentage units below 43.4 lbs/bu.
Since light test weight barley is generally a mixture of shrunken and normal sized kernels, it is often more difficult to process than normal or high test weight grain. The variation in kernel size makes setting the processing equipment more difficult. Extra care and attention is necessary to effectively process light test weight barley. In some cases light and heavy barley may be blended to make a certain bushel weight grade. For instance, barley weighing 53 lbs/bu and 43 lbs/bu may be blended to produce barley weighing 48 lbs/bu. This can make uniform processing very difficult.