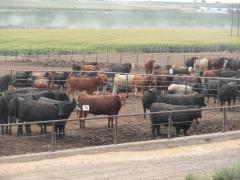 Summary: Complex diseases such as BRDC involve the influence of many genes and are by definition hard to predict. Results from the BRD CAP illustrate that by using the 770K SNP assay and accurate case diagnosis, the genomic heritability estimates of BRDC susceptibility in Holstein dairy calves is moderately heritable (0.21). The SNP assays are finding genomic regions associated with BRDC susceptibility, suggesting that genetic progress in these traits could be made by including the specific SNP markers that are indicators of BRDC disease risk in national cattle genetic evaluations.

There is growing interest in the selective breeding of livestock for enhanced disease resistance. Bovine respiratory disease complex (BRDC), also referred to as pneumonia or shipping fever, is the leading natural cause of death in U.S. beef and dairy cattle, causing the annual loss of more than one million animals and financial losses in excess of 1 billion dollars per year. Bovine respiratory disease is considered a complex because many different viral and bacterial pathogens are known to be involved in causing disease symptoms.

Why Use a Genomics Approach?

Newly-available genomic tools offer an opportunity to employ novel genetic approaches to select for cattle that are less susceptible to disease. Decreasing the incidence of bovine pneumonia is much-needed given increasing concerns about food animal welfare and the use of therapeutic treatments. Incorporating disease-resistance into breeding decisions offers a sustainable, long-term approach to reduce disease incidence and improve animal health.

Data on BRDC incidence is not routinely collected on most farms, nor is it included in national genetic evaluations.  This precludes traditional genetic improvement; you can’t manage what you don’t measure. With this problem in mind, a group of scientists at several large U.S. universities obtained USDA funding for a project called the Bovine Respiratory Disease Coordinated Agricultural Project (BRD CAP) to address this problem using the tools of genomics.

The BRDC CAP features a unique interdisciplinary team of veterinarians with bovine respiratory disease complex experience in both dairy and beef cattle, geneticists with specialties in animal health, disease, immunology, epigenetics, and quantitative genetics, as well as epidemiologists, animal behaviorists, microbiologists, livestock economists, and veterinary and livestock cooperative extension specialists. Texas A&M University is the lead institution for this project.

The basic idea behind the major research component of the CAP was to take DNA from a large cohort (>1,000) of pre-weaned dairy calves and feedlot beef cattle that were diagnosed with naturally-occurring BRDC, and also collect DNA from their immediate neighbors that were exposed to the same environmental stressors and yet remained healthy.

All of these DNA samples were run on a 770,000 single nucleotide polymorphism (770K SNP) genotyping chip and the profiles of the sick cattle were then compared to those that were healthy to see if there were any genetic markers associated with reduced susceptibility to BRDC.  This approach is called a Genome-Wide Association Study (GWAS).

The results of the dairy study showed moderate (~ 0.21) heritability estimates for BRDC susceptibility in pre-weaned Holstein calves. These heritability estimates are higher than those that have been achieved previously which may be attributable to the use of the objective scoring system to more precisely diagnose BRDC. Heritability is known to increase when the accuracy of a measured phenotype (in this case the BRDC diagnosis) improves.

There were over 100 genomic regions that were significantly associated with BRD, many of which were near biologically meaningful genes. The fact that so many regions of interest were identified supports the idea that many genes are associated with susceptibility to this complex disease.

Data collection from the feedlot beef cattle population is complete, and a similar analysis is being performed to identify genetic markers in this population. It will be interesting to determine if there is any overlap between the regions of the genome that are associated with decreased susceptibility in pre-weaned Holstein calves as compared to feedlot beef cattle.

Economists on the BRD CAP team worked with the feedlot data collected as a part of this project and, using the most current national estimate of 16.2% BRDC prevalence in feedlots, they calculated that 4,071,854 feedlot cattle were likely afflicted with BRDC in 2013. A conservative estimate of the cost of BRDC to feedlots (based on a single treatment cost, and loss of carcass value) was estimated to be $253.97 per animal or $1.034 billion in total losses to the feedlot industry. If producers were able to make a 1-2% improvement in BRDC susceptibility by selecting for cattle using an accurate BRDC susceptibility genetic test, it was estimated that the feedlot industry could realize gains of $13,030,022 to $21,509,877 per year, based on 2013 costs and market prices. This underscores how valuable the results of this BRD CAP genomics research could be to the beef cattle industry.

The significance of genetics as it relates to BRDC susceptibility is simply illustrated by looking at the distribution of AI sires among the case:control Holstein calves that were enrolled in the dairy component of this study. We examined the 30 sires that had 11 or more calves in the data set to determine whether sires generated case and control calves at an equal rate, or if there was a tendency for some sires to produce a disproportionately high number of either category.

It can be seen in Table 1 that some sires produced proportions of case (e.g. sire 3 and 19), and control (e.g. sire 12 and 30) calves that were significantly higher than expected. If sires 12 and 30 have acceptable genetic merit in other traits of economic importance, then their use could offer an approach to affect a sustained decrease in the incidence of BRDC in dairy cattle.

Future work includes refinement of the diagnostic marker set and implementation of BRD susceptibility prediction into national cattle genetic evaluation schemes. In the case of Holstein dairy cattle this will be done within the context of other traits of economic importance in the dairy Net Merit ($NM) Index.

The implementation of results in the beef industry presents a more challenging situation. It has been found that the accuracy of prediction equations developed in one breed of beef cattle have not proven to be useful in other breeds when using the more sparsely spaced 50K SNP chip. The BRD CAP envisioned that by performing the GWAS with the ~770K SNPs, predictive markers would be associated with all loci associated with BRD susceptibility and that such markers may be predictive across beef breeds.  We  do not yet know whether the trait of BRD susceptibility in beef cattle will be associated with several large effect single mutations, or have a more polygenic inheritance pattern (i.e. be associated with many small effect loci).

Even if the technical challenges can be overcome, the real task may be getting the industry to incorporate the trait of disease susceptibility into beef cattle selection indices and selection decisions. Like other traits of economic importance, the appropriate weighting to place on genetic merit estimates of BRDC susceptibility will have to be calculated based on the relative economic value of this trait versus other traits of economic importance to beef production.

It should be noted that the GWAS studies detailed in this fact sheet are just one component of the BRD CAP research being conducted to identify genomic regions associated with BRDC susceptibility. Other approaches include the identification of DNA structural variants (differences in the number of copies of a region of DNA that alters gene expression) that have major effects on BRDC susceptibility (L. Skow, TX), gene expression (RNA-sequencing) studies from bacterially-challenged animals to identify genes differentially expressed in cattle in response to a pathogen (L. Gershwin, CA and J. Taylor, MO) and pathway analysis to identify genes whose individual effects on BRDC susceptibility are small but whose effects on BRDC susceptibility are great when taken together with other genes present in a biological pathway (H. Neibergs, WA). It is predicted that jointly these studies will result in the information required to enable the much-needed development of DNA tests for the selection of animals that are less susceptible to BRDC.

Complex diseases such as BRDC involve the influence of many genes and are by definition hard to predict. Results from the BRD CAP illustrate that by using the 770K SNP assay and accurate case diagnosis, the genomic heritability estimates of BRDC susceptibility in Holstein dairy calves is moderately heritable (0.21). The SNP assays are finding genomic regions associated with BRDC susceptibility, suggesting that genetic progress in these traits could be made by including the specific SNP markers that are indicators of BRDC disease risk in national cattle genetic evaluations.

This research was conducted by the Bovine Respiratory Disease Consortium Coordinated Agricultural Project (BRD CAP) team members and funding from the USDA Agriculture and Food Research Initiative (Grant no. 2011-68004-30367; J. E. Womack, Texas A&M, PD) from the USDA National Institute of Food and Agriculture. More information about the BRD CAP can be found at http://www.brdcomplex.org/.