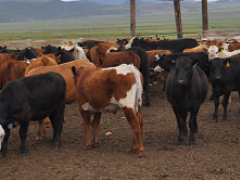 Summary: Genetic defects are hereditary conditions that result in an undesirable phenotype (i.e. disease or trait).  Genetic tests now exist for many of these genetic conditions.  This fact sheet details the different conditions that have been identified in breeds and the companies that do genetic testing in cattle.

What is a genetic defect?

Chromosomes inherited from parents determine an animal’s genetic make-up. Chromosomes come in pairs; one chromosome from each pair is inherited from an individual’s sire and the other chromosome is inherited from its dam. There are thousands of genes on each chromosome. Genes are the basic units of inheritance and they comprise distinct sequences of DNA (A’s, T’s, C’s and G’s) that contain all of the instructions for making proteins. It is common for the DNA sequence that makes up a gene or “locus” to differ between individuals. These alternative DNA sequences or forms of a gene are called alleles, and they can result in differences in the amount or sequence of protein being produced by that gene among different individual animals. A single nucleotide polymorphism, or SNP (pronounced “snip”), occurs when alleles differ from each other by the sequence of only a single nucleotide base pair (e.g. one individual has a G and another has a T at a particular position in the gene as shown in  Figure 1).

However, when the SNP does produce an allele that can cause a phenotypic difference between individuals this variation provides the basis for selection programs and genetic improvement. Mutations are not always associated with decreased fitness, and in fact mutations can have positive effects and are the driving force of adaptive evolution. Mutations are a relatively common occurrence, and it has been estimated that the average human carries approximately 1,000 detrimental SNP mutations.

It is important to understand that these differences between individuals occur because of mutations in the DNA sequence and that this variation provides the basis for selection programs and genetic improvement. Mutations are not always associated with decreased fitness; in fact mutations provide the starting variation for adaptive evolution. Mutations are relatively common, occurring every generation.  It has been estimated that the average human carries approximately 250-300 loss-of-function mutations in known genes, and 50-100 mutations previously implicated in inherited disorders.

A genetic defect is a mutation that results in an allele with an undesirable phenotype (i.e. disease or trait). Some mutations result in gross hereditary defects such as abnormalities in skeleton, body form, and body functions.

Others are associated with a phenotype that may be advantageous in some situations and disadvantageous in others (e.g. presence or absence of horns). Homozygous is a term used to refer to an animal that carries two identical alleles of a gene (e.g. AA), and the term heterozygous is used to describe an animal that inherited differing alleles of a gene from each of its parents (e.g. Aa). Alleles can be recessive, meaning that an animal must inherit the same allele from both parents (i.e. be homozygous) before there is an effect, additive meaning that the effect is proportional to the number of alleles inherited by the animal (i.e. carrying two copies of a particular allele produces double the effect of carrying one copy), or dominant meaning that the inheritance of a single dominant allele can completely mask the expression of the allele inherited  from the other parent.

Many genetic defects are recessive, and the reason for this is that mutant alleles often render the resulting protein nonfunctional. In many cases if an individual inherits a functional allele from one parent, there is no phenotype associated with inheriting the nonfunctional mutant allele from the other parent. As such a heterozygous “Aa” (A symbolizes the dominant allele, a the recessive allele) animal, or carrier, appears normal. Because carriers appear normal, recessive alleles can increase in frequency in a population more easily than dominant or additive alleles. It is only when two carriers mate that there is the possibility of producing offspring that have by chance inherited both of the non-functional alleles from their parents. The example gene combinations that can occur with a recessive genetic condition are shown in Figure 2. Note that if this is a lethal genetic condition then all of the animals that are represented as solid black would not be alive and so the only possible matings would be between unaffected (green) and carrier (green and red) individuals.

All animals are carriers of mutations somewhere in their DNA for one or many recessive traits. Because an animal must inherit two copies of a given recessive mutation to be affected, and with only a few animals typically sharing the same mutation in the whole population, there is rarely a mating that has the potential to create affected offspring. It is when relatives are mated that there is an increased possibility that offspring will inherit the mutant allele on both sides of the family tree.

Although the cumulative costs of testing for genetic defects have been substantial, they are dwarfed by what it would have cost to eliminate all of the descendants of widely used carrier bulls. The speed with which these genetic tests were developed is testament to the power of having access to the bovine genome sequence information, and is perhaps the greatest success story of genomics never told. The proactive response of the breed association in making genotypes available also helped to rapidly and transparently address the problem. The sooner a defect is recognized and the genetic cause identified, the sooner it can be managed.

The term genotyping refers to the process of using laboratory methods to determine which alleles an individual animal carries, usually at one particular gene or “locus” in the genome. The genotype identifies which alleles an animal carries. Producers must send in samples containing DNA from animals to be tested to the testing lab. Because all cells contain DNA, it is possible to genotype many different tissue types; however, laboratories may differ in their preferred sample type. Typical samples include blood vials or cards, semen, and tail hair samples. It is important that tail hair samples include the roots – ideally 30-50 hairs with intact roots.

If you are sampling DNA from a deceased animal, call the testing laboratory to determine the best protocol. It is important to get a good quality sample to ensure the DNA test will be able to generate results. The cost of testing varies depending upon the company and how many tests are performed but ranges from $10-40/test; with an average of ~$25/test. Irrespective of carrier animals in its pedigree, an animal that has been tested and found to be a non-carrier did not inherit the mutant allele and will not transmit the genetic defect to its progeny. 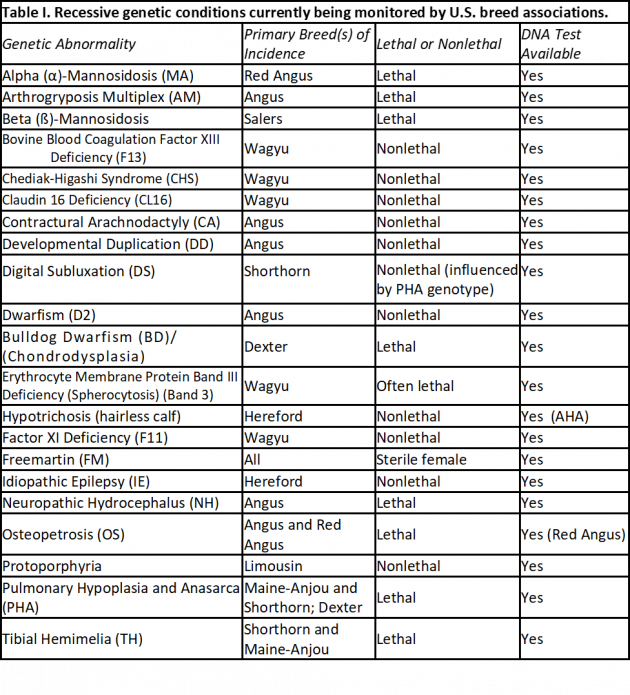 Tests available: AM, CA, and NH