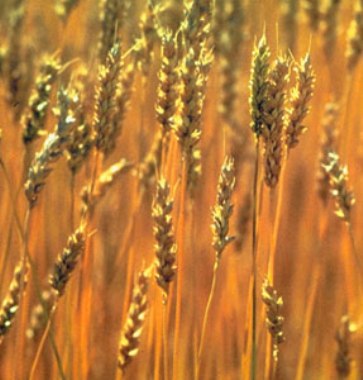 I have been asked several questions about feeding wheat this winter to calves and cows. The following recommendations come from the beef nutritionists at Kansas State University.

What is the value of wheat in beef cattle rations?

Wheat is an excellent feed grain when priced competitively with corn and milo. Typically, Kansas red wheats are 3 to 4 percentage units higher in protein and similar in energy to corn. In addition, mill run wheat is usually drier and cleaner than other feed grains. Wheat is particularly useful in growing rations because of its higher protein content. Pound for pound, wheat is generally worth 103 to 108 percent of the value of corn in beef cattle rations. Blending wheat with other grains in growing and finishing diets also has shown excellent benefits.

How much wheat can be fed in the ration?

Because wheat is very rapidly digested and tends to produce excessive fines when dry processed, it is usually blended with other feedstuffs to prevent the possibility of digestive upsets. Conservatively, beef cow supplements and creep feeds can contain 30 to 50 percent wheat. In growing programs, wheat can be the sole source of grain in silage-based diets, and it can constitute up to 50 percent of the grain in dry, hay-based rations. In finishing rations, dry rolled wheat can account for 50 to 60 percent of the grain fed.

How should wheat be processed?

Wheat must be processed to improve digestibility by cattle. Steam rolling (not flaking) wheat to a 36 to 39 lb/bushel density is optimal for feedlots. The resulting product is thick and durable and has a crimped appearance. In addition to minimizing ration fines, K-State research shows that steam rolling reduces the rate of wheat starch digestion in the rumen compared to dry rolling. This results in higher intakes, more rapid and efficient gains, and less likelihood of digestive upsets. For farmer feeders without steam rolling capabilities, coarse dry rolling or grinding of wheat results in a very acceptable product.

When rolling or grinding, process as coarsely as possible. Moisture tempering of the dry grain prior to rolling, or adding water or molasses on the feed truck or mixer wagon, particularly when dry roughages are used, may help bind fines to roughage particles and aid in ration conditioning. Whatever processing method is used, the goal is to maximize particle size and minimize fines.